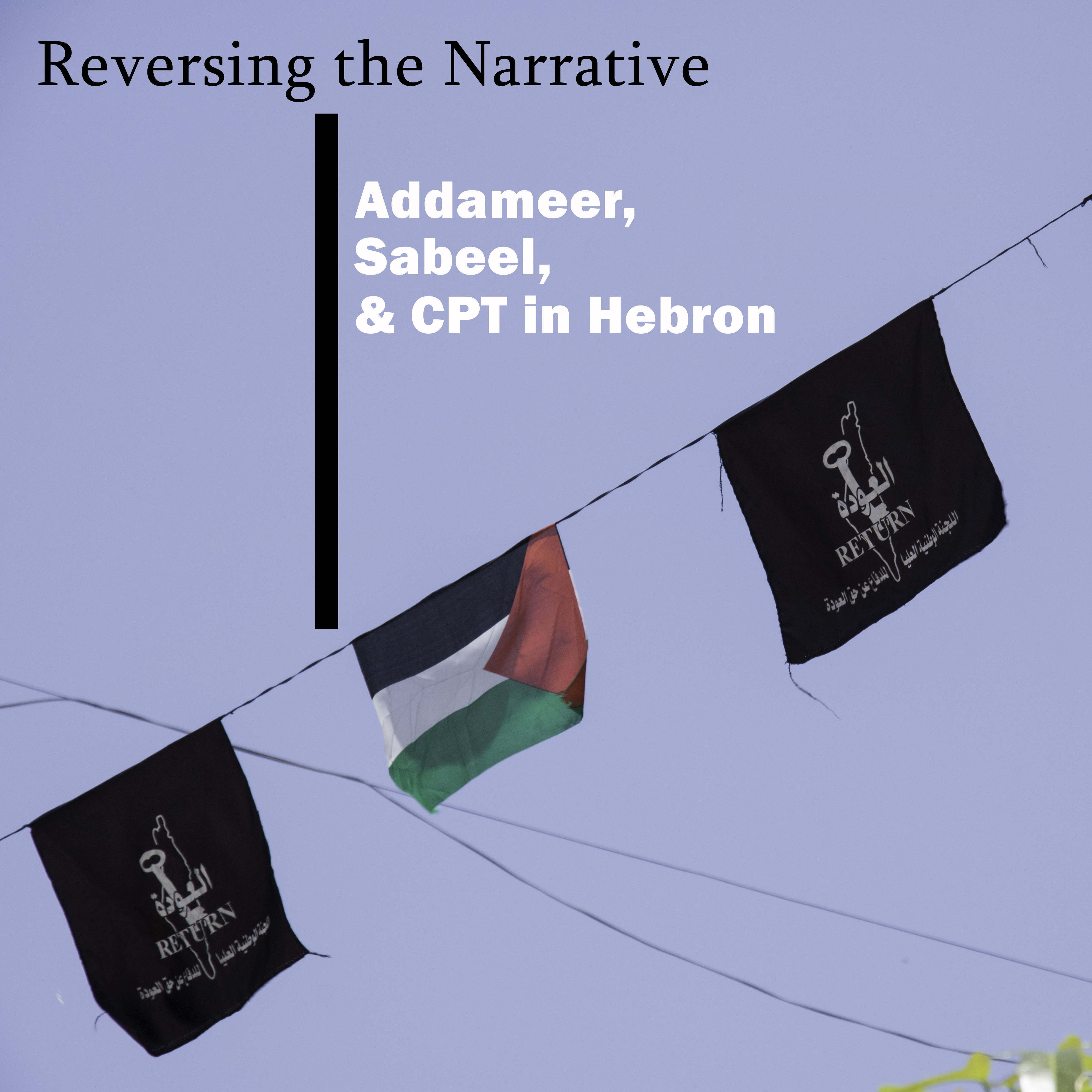 When I last left you, I was fresh from a meeting with Wi’am. I felt quite hopeful. Now, I feel hardened, like iron being refined in a fire, until I emerge in a changed state--not beautiful but more resilient.

“See, I have refined you, though not as silver; I have tested you in the furnace of affliction."

Weirdly, I find this verse comforting, even in the midst of all I am learning and my personal battle with my spirituality. My time in Hebron feels as though it was for refinement. Before Hebron, I had meetings with Addameer, an organization focusing on prisoner’s rights, and Sabeel, a group developing and acting out a Palestinian liberation theology. 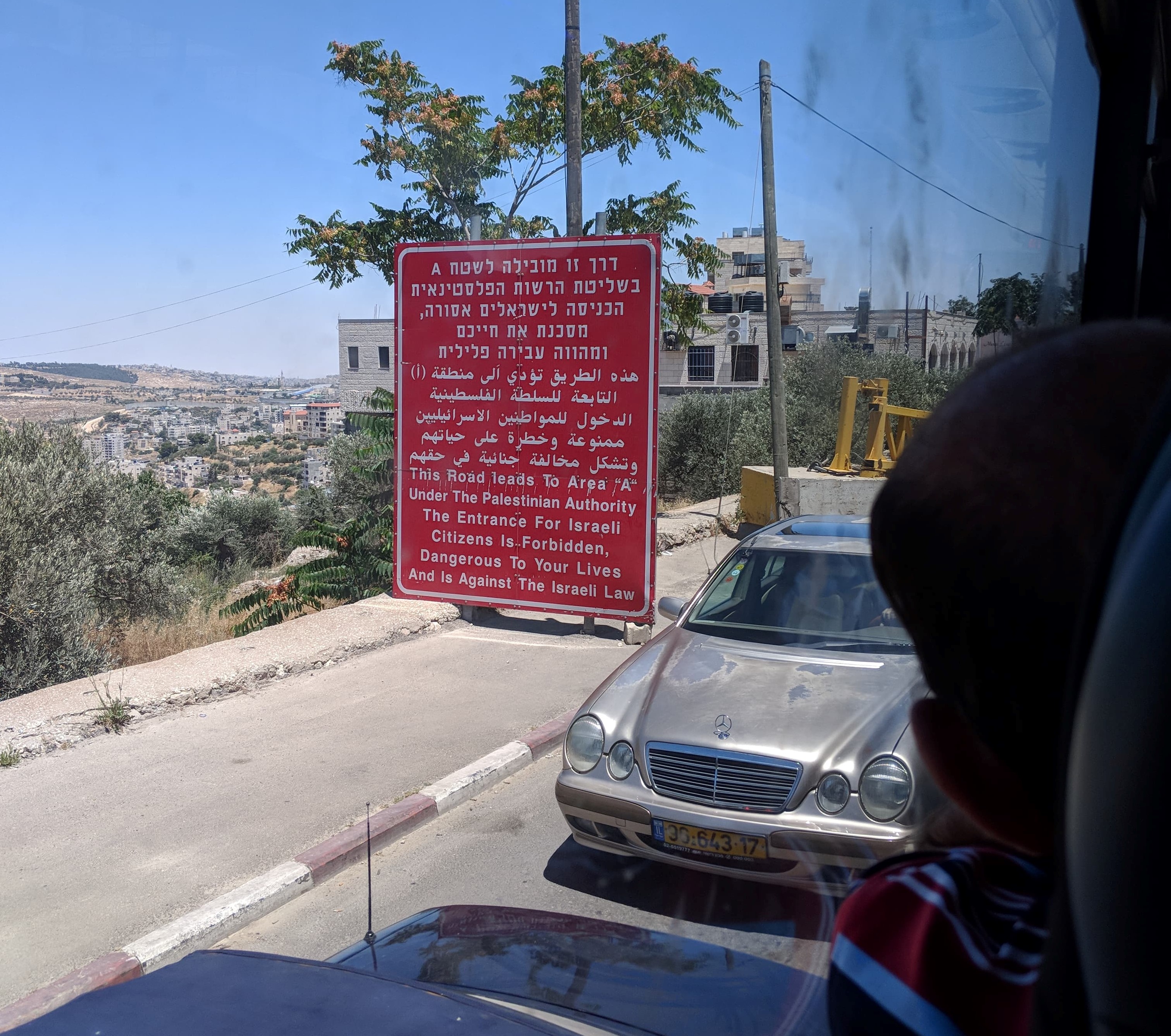 This was my first visit to Ramallah, a city about two hours north of Bethlehem. I had to find a “servees,” which is like a shared taxi that is direct to the city of Ramallah. On the way there, through the twisting mountain roads that made me feel sick, I saw odd, bright red signs informing Israeli citizens of the danger of going into the area.

When I arrived in Ramallah, I was dropped off in a random place, and it was insane--people everywhere in the markets, yelling and trying to get me to come into their shops. I was a bit early for my meeting at two and equally overwhelmed, so I walked until I found a place to breathe in quiet. Ramallah is certainly a busy city, I’ve found. 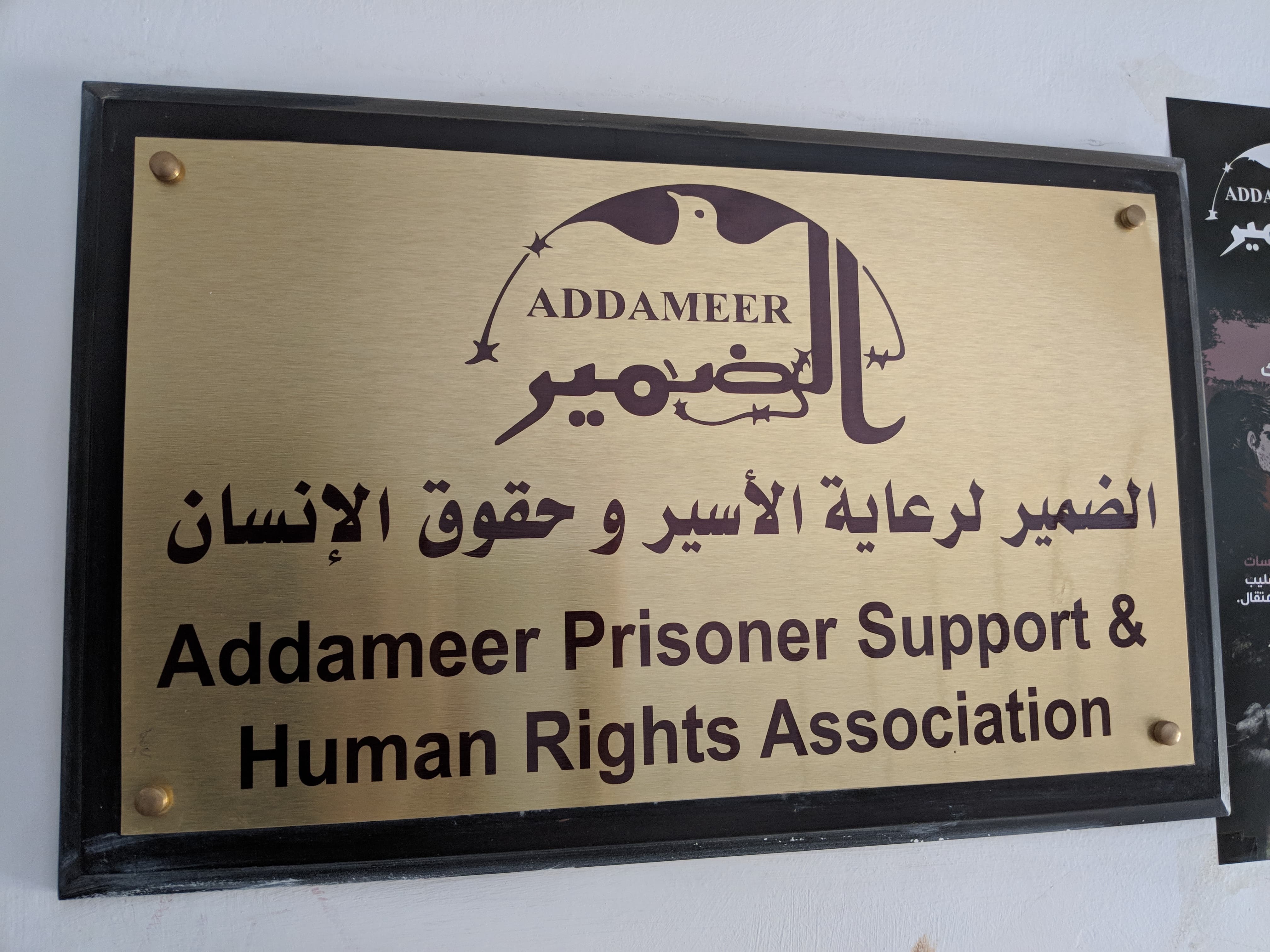 Eventually, I found Addameer’s office with the help of a kind, old man outside. I had an hour meeting with David, the advocacy and lobbying coordinator. He has worked with both Amnesty International and the United Nations, but working with Addameer gives him a sense of a meaningful life aimed at mitigating suffering through the focus Addameer puts on Palestinian prisoners’ rights in the occupation and the direct action they do rather than just talking. They provide legal aid for cases and community empowerment by teaching Palestinian’s their rights. Another aspect of Addameer is their grassroots push to inspire people to pressure their decision makers to change the reality of the occupation. Advocacy is a big part of what they do, especially in regards to the legal system and the abuses of the Israeli military judicial system.

Leaving Ramallah, I encountered a protest; however, my language skills are quite limited, so I could not understand what was happening. Although I enjoyed seeing the people chant and raise their flags as I made my way back to the servees station to return to Bethlehem.

For me, getting to Jerusalem from Bethlehem is child’s play at this point. Navigating Jerusalem is less easy, which is why I was forty minutes late to the service I had planned to attend with Sabeel, a Christian organization in Jerusalem focused on Palestinian liberation theology. The only reason I found the place was with the aid of yet another Palestinian being helpful. This has been a common theme.

I arrived at the end of the service and had lunch with Sabeel and other people at the organization that day. Being there was quite enjoyable. The food was delicious, and the conversations were lovely. I even received some leftovers to take home with me.

As for my conversation with Omar, the leader of Sabeel, I enjoyed hearing about his nonviolent creative resistance to many of the Christian Zionists. Sabeel is committed to challenging exclusive theology. At first, being a Palestinian Christian was difficult until the two identities were resolved through the development of the Palestinian liberation theology. Omar provided me with a couple books and pamphlets that describe more of the work Sabeel is doing. For those interested, I will be including information about them in my upcoming newsletter. I had no idea of the difficulty of uniting the Palestinian identity and Christianity in the face of the occupation, and I appreciated hearing about Omar’s perspective. I plan to read more in the resources he gave me as well.

I left with an invitation to the next Thursday service. I plan to arrive on time then. 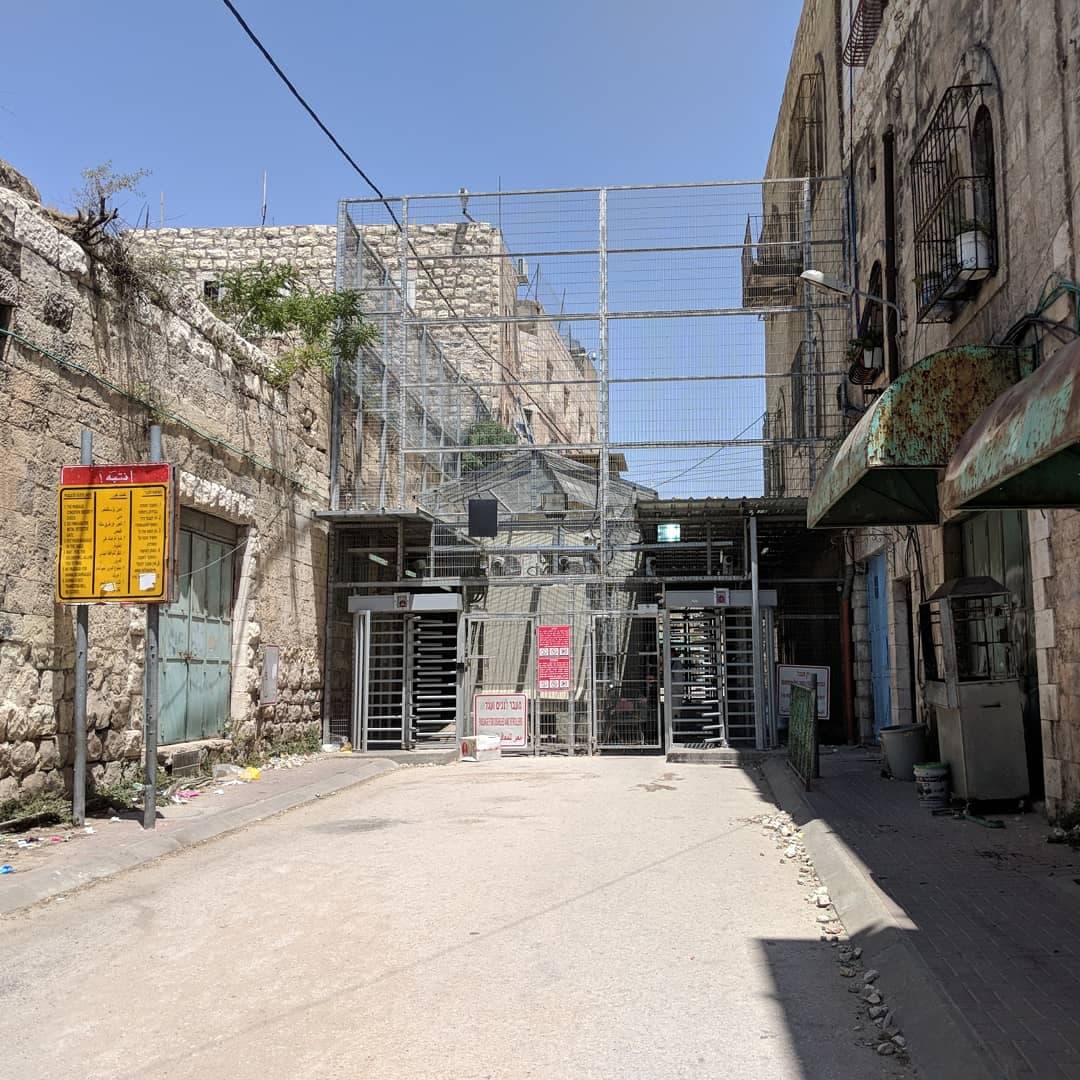 My time in Hebron with CPT was...real. Perhaps that is the best word to describe it. I came to this situation hoping to encounter the occupation, and I have. I stayed in a Palestinian’s house for about two and a half hours. CPT warned me about what to do if I was arrested and detained, telling me I could leave if I wanted. It never crossed my mind to do anything but stay, as long as CPT was there.

After taking a servees to Hebron, I arrived at about 9:30 AM. Immediately, I sat down on the curb and called CPT to figure out where their apartment was.A CPT-er met me halfway in the market as I wandered slowly through it, trying to find the right way. The people allowed me to have a traditional Palestinian breakfast with them before letting me be a part of their reflection and check-in. The previous night, they had trouble with youth-aged settlers causing trouble for a Palestinian family in Hebron and some of them were tired because of it. The plan they created for the day was two groups watching the checkpoints to the mosque, as many Palestinian Muslims would be going there for prayer. Two checkpoints existed simply to get to the mosque to pray. 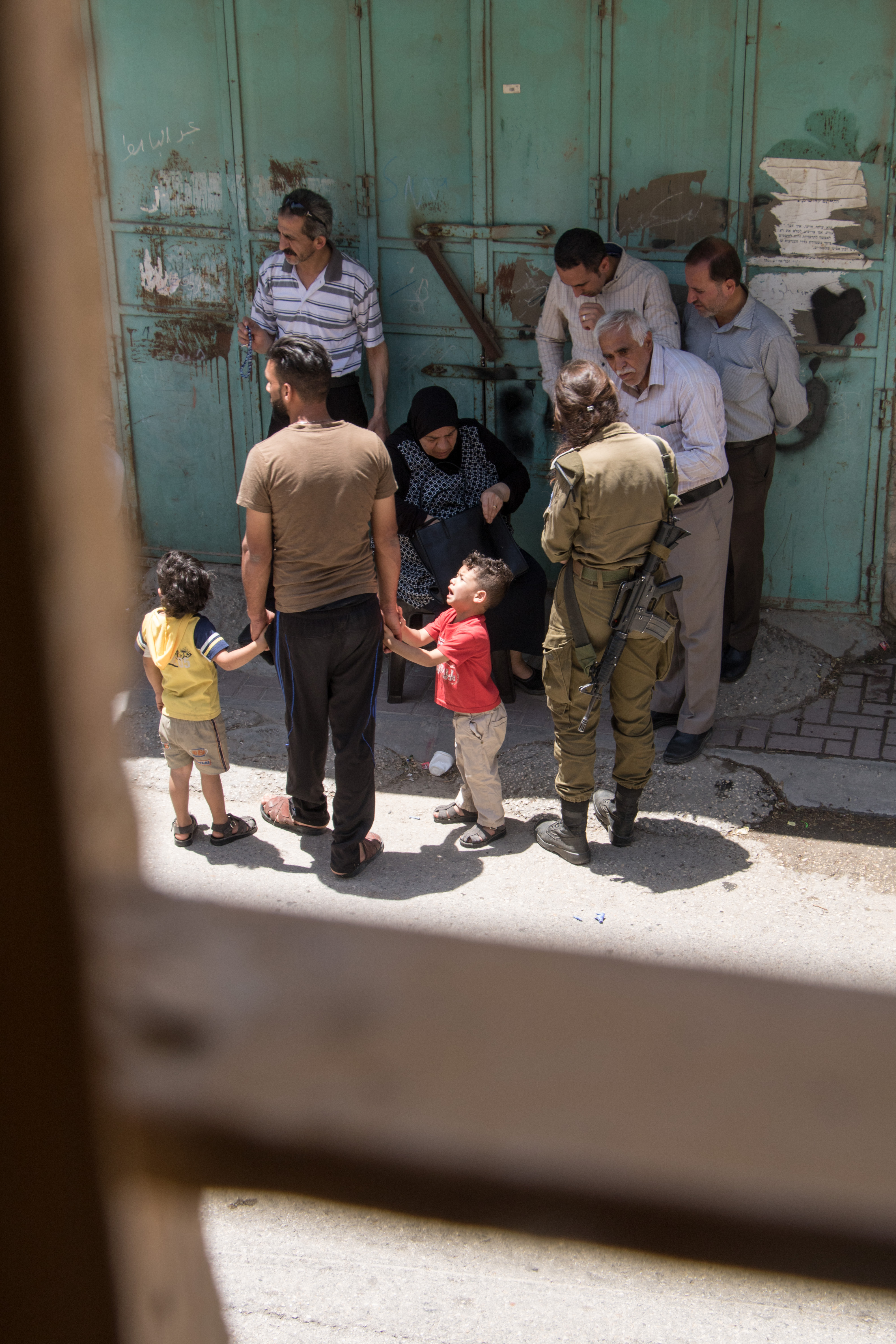 Before beginning my shadowing with CPT, I went and spoke with Zleikha Almohsateb, who lived in the apartment across from CPT. She graciously allowed me into her house, and we had a thirty minute conversation about her years living in Hebron.  It was real. It was depressing. It was insane that someone has to live with their lives surrounded by settlements and checkpoints. If you don’t know what I mean by those words, click the links to learn more. Zleikha had a grate over her balcony facing Shuhada Street, which connected all the settlements surrounding Hebron. I asked her why, and she pointed out the dried egg shell and stones gathered on top of the grate. Why? For her own protection. Before the grate, settlers had tried to climb into her home. Now, they harass her with eggs and stones to try and drive her out of her home. Her front door facing Shuhada Street was welded shut by Israel in favor of "security."

Eventually, I had to go back to CPT. The plans had changed. One of the members had received a phone call from another organization about eviction orders a Palestinian family had recently received. They had four hours to evacuate and needed as many witnesses and supporters as possible. Two CPT-ers would go to the checkpoint and the other two would go to the house. I went with the group to the house.

We had to go through checkpoint 56 to get to the house, going through a giant turnstile just to go to another street. When we arrived on the other side, we found the family with relative ease. Already, a couple soldiers were standing and questioning some Palestinians outside the home. Throughout the two or so hours I stayed there, I was asked multiple times by CPT if I was comfortable staying and being warned about the possibility of arrest if the soldiers came because the family was planning on resisting. I wanted to stay. This is why I came here: to research and to witness the occupation. Eventually, we had to leave (CPT would come back--I wouldn’t), but not before I met some journalists from Reuters and became connected to one of them. Serendipity.

Hebron is real. Zleikha said the checkpoints aren’t about security; they are about fear, control, and humiliation. I have to agree, seeing what happened in Hebron. I am also in despair because of it, because of reality; however, what’s the point in being sad? Sadness and despair will not change the situation. A person who has witnessed more than me has informed me of this, and I need to remember it. People who are trying to learn need to take care of themselves too, I have learned. Someone who disintegrates is someone who cannot help, and I plan to help.

Being here is a learning experience. Being here has been hard, and I am only here for a short time. I hope to take what I learn and build upon it, advocating for the Palestinian people and continuing to learn in order to help change the situation.

At this point in my life, little else can be done with my skills. I have to be okay with that. 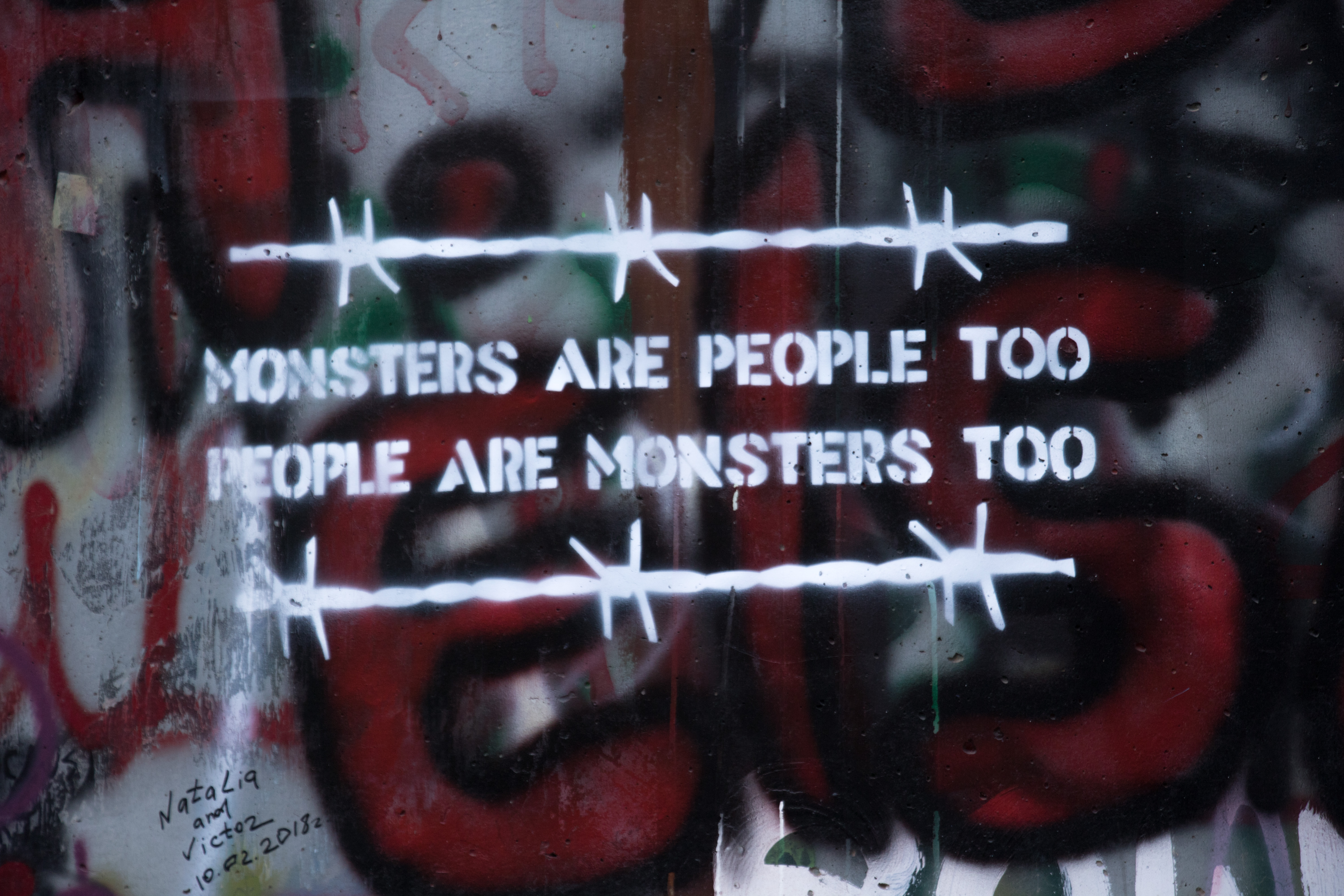 If you'd like to hear about my meetings with these organizations in more depth, please sign up for the Palestine Justice Notes newsletter here! I will be sending out an emails highlighting the organizations I have been interviewing, and you can find ways to support them. I will also be including other things about Palestinian life and culture within the email as well. Please consider adding it to your email list!