The New Year & Childcare in the US 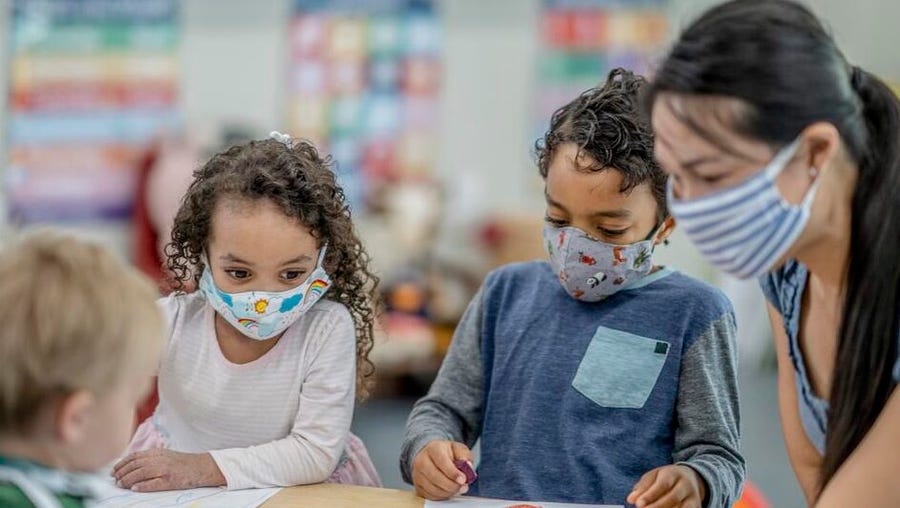 Caption: Multi-ethnic group of children colouring at a table while wearing protective face masks to avoid the transfer of germs.

As we move into a new year, we move back into school after a well-deserved winter break. While many parents throughout the U.S. were happy to have multiple days off to spend with their children while school was out for the holidays, others had to continue to work throughout that time. For those parents who were forced to work, for monetary or other reasons, the holidays were likely a stressful time. They had to find childcare for their children, an expensive and, due to the current worker shortage, generally difficult endeavor.

In most parts of the U.S., childcare is generally not free or even reduced for most parents. On average, across the country parents spend about $8355 on childcare per year. Due to people being able to stay home during the Pandemic in 2020, this is cheaper than it has been in previous years—most of the time, the cost is $9600 per year on average, a price that many Americans are unable to pay.

Single-parent households, which are more likely to need the aid of childcare, on average spend 30% of their income on childcare costs. This leaves very little money for them to be able to spend on other necessities, such as food, housing, transportation and school supplies for their children.

Since the Pandemic, there has been an intense worker shortage. This is happening in every sect of U.S. society, but it is especially prevalent in childcare. Childcare workers have always been paid low wages—many careers considered “feminine,” such as work in childcare, often face the issue of not being considered especially “skilled” work. Teachers often go through this issue due to the field being considered “feminine”; in recent years, Psychology has faced this problem as well, due to more women going into the field. Childcare-related careers in particular are largely populated by women, and lie within a specific field which is essentially unpaid within the home: mothers tend to take on the labor of childcare without any sort of payment.

Because of the worker shortage caused by low wages and almost-nonexistent benefits, parents were often unable to find options for childcare during the height of the pandemic. Parents who had to continue their in-person minimum-wage jobs often had to find less-than-ideal childcare situations or quit their jobs completely to go on unemployment and take on the task of childcare themselves. The U.S. government has unfortunately given little-to-no options for these parents, and has invested very little money into the childcare field in general. What will happen when no one wants to work in childcare anymore? We will most likely seeing more parents, mostly mothers, quitting their jobs to take on the labor of childcare themselves—taking many women out of the workforce.

Some ways we can avoid this happening include: investing more money into childcare so that workers can be paid the wages and given the benefits they deserve, paying parents who want to stay home with their children to raise them for their own labor in childcare. However, these two things cannot be put into place effectively without moving away from a culture of “feminine” vs. “masculine” labor, something which harms both individuals and the job market in general.