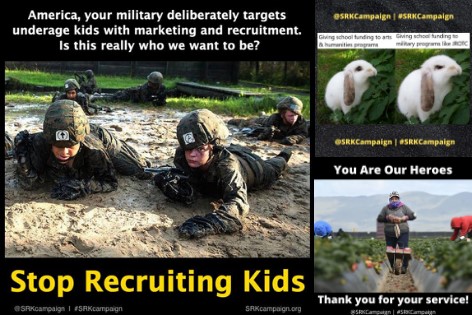 The Stop Recruiting Kids Campaign (SRK) has been doing digital organizing since before it was cool. SRK organizes on Facebook, Twitter, and most recently on Instagram to protect kids from military recruitment and promote principles of Kingian nonviolence. The campaign is not anti-military but rather it is pro-child as kids are not able to judge the risks of military service. The Pentagon knows this and uses its massive resources to offer economic opportunity, personal development, and other skills to draw in thousands of young people to enlist. It is our goal to make sure that there are peaceful, nonviolent opportunities for kids, and to expose the violence of the US military’s recruitment of kids.

SRK campaign has worked towards its goals by sharing petitions and classic memes. Using direct messaging and imagery, these memes have brought awareness to the reality behind the military recruiting of kids. The memes are powerful; they speak to the campaign’s goals of upholding principles of Kingian nonviolence by targeting systems rather than individuals.

Today the campaign still uses these memes because they are so poignant and impactful. However, we are also pushing to refresh the campaign’s social media presence through expanding and diversifying our meme collections. So far, we’ve focused our work on two sets of memes (follow our social media to see new sets as we release them)- one focuses on the Junior Reserve Officer Training Corps program, while the other responds to both the current crisis with Coronavirus and the way our culture glorifies military service while ignoring and devaluing other forms of service work.

The Junior Reserve Officer Training Corps (JROTC) memes seek to draw attention to one of the many ways the Pentagon infiltrates schools and the lives of students in order to recruit them into military service. To do this, we wanted to try something new by using popular meme formats and images that are familiar to young people.

These memes work to never attack the schools, instructors, or cadets who participate in JROTC programs but rather focus on the systems that allow these programs and the violence that they represent to persist. While these new memes are very different from the classic memes, we hope they will be able to inspire new ways of looking at issues of military recruitment and the Pentagon’s involvement in schools.

New Memes: Thank You For Your Service

The second set of memes we have been focused on are titled “Thank You For Your Service,” taking a phrase commonly used for military veterans and turning it around to acknowledge the service of people who often go unrecognized. The memes highlight janitors, housekeepers, fast food workers, health care workers, postal workers, truckers, farmers, and more.

While there has been some pushback on the memes, specifically when highlighting the work of healthcare workers, using such military-oriented language positions workers as heroically sacrificing themselves rather than as victims. This set of memes is important to us because we want to highlight the dignity and service-focus of jobs beyond the military. This critique also applies equally to soldiers who are praised as heroes sacrificing themselves for our freedoms, while in fact, they are also victims of the Pentagon’s systematic child recruitment.

As the Stop Recruiting Kids Campaign moves forward, we will continue to post SRK classic memes as well as our newer memes and will soon be shifting our attention to the proposed changes to expand the Selective Service registration requirement to include women. No matter what our specific focus, we will work towards our goals of protecting children from the risks of military service and doing it all with a mind to principles of nonviolence.