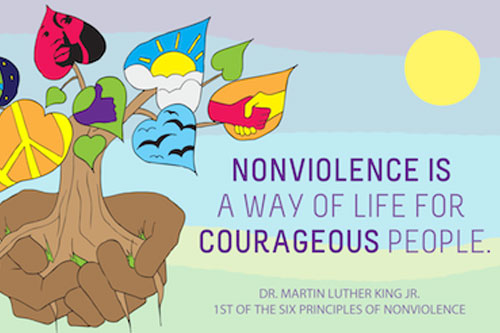 A Philosophy and Methodology

Kingian Nonviolence is a philosophy and methodology—with knowledge, skills, and motivation people can use to apply peaceful strategies for solving personal and community problems.

The "Six Principles" of Kingian Nonviolence—the "will" of the discipline—provide the philosophy.

The "Six Steps" of Kingian Nonviolence—the “skill” of the practice—provide the method.

The Six Principles of Kingian Nonviolence

Principle One: Nonviolence is a way of life for courageous people.
It is a positive force confronting the forces of injustice, and utilizes the righteous indignation and the spiritual, emotional and intellectual capabilities of people as the vital force for change and reconciliation.

Principle Two: The Beloved Community is the framework of the future.
The nonviolent concept is an overall effort to achieve a reconciled world by raising the level of relationships among people to a height where justice prevails and persons attain their full human potential.

Principle Three: Attack forces of evil, not persons doing evil.
The nonviolent approach helps one analyze the fundamental conditions, policies and practices of the conflict rather than reacting to one’s opponents or their personalities.

Principle Four: Accept suffering without retaliation for the sake of the cause to achieve the goal.
Self-chosen suffering is redemptive and helps the movement grow in a spiritual as well as a humanitarian dimension. The moral authority of voluntary suffering for a goal communicates the concern to one’s own friends and community as well as to the opponent.

Principle Five: Avoid internal violence of the spirit as well as external physical violence.
The nonviolent attitude permeates all aspects of the campaign. It provides mirror type reflection of the reality of the condition to one’s opponent and the community at large. Specific activities must be designed to help maintain a high level of spirit and morale during a nonviolent campaign.

Principle Six: The universe is on the side of justice.
Truth is universal and human society and each human being is oriented to the just sense of order of the universe. The fundamental values in all the world’s great religions include the concept that the moral arc of the universe bends towards justice. For the nonviolent practitioner, nonviolence introduces a new moral context in which nonviolence is both the means and the end.

The Six Steps of Kingian Nonviolence

Do not view these like steps on a ladder. During an initiative, actions and events do not always go in a linear order. These are more like phases or cycles of a campaign rather than steps -- each of them involves groups of activities that are interrelated with each of the other five.

Step One: Information Gathering
The way you determine the facts, the options for change, and the timing of pressure for raising the issue is a collective process.

Step Two: Education
Is the process of developing articulate leaders who are knowledgable about the issues. It is directed towards the community through all forms of media about the real issues and human consequences of an unjust situation.

Step Three: Personal Commitment
Means looking at your internal and external involvement in the nonviolent campaign and preparing yourself for long-term as well as short-term action.

Step Four: Negotiation
Is the art of bringing together your views and those of your opponent to arrive at a just conclusion or clarify the unresolved issues, at which point the conflict is formalized.

Step Five: Direct Action
Occurs when negotiations have broken down or failed to produce a just response to the contested issues and conditions.

Step Six: Reconciliation
Is the mandatory closing step of a campaign, when the opponents and proponents celebrate the victory and provide joint leadership to implement change.

On Earth Peace offers a range of trainings and consultations -- in person and online -- beginning with 1-hour introductions to dozens of Kingian Nonviolence concepts and techniques, and extending all the way to the standard 2-day core workshop with all the Kingian Nonviolence modules.

Contact us to explore your plans and needs for Kingian Nonviolence training.

Here are some of our key partners who also focus on Kingian Nonviolence training and practice.

Please tell them you learned about their work through OEP! We are all in this together. 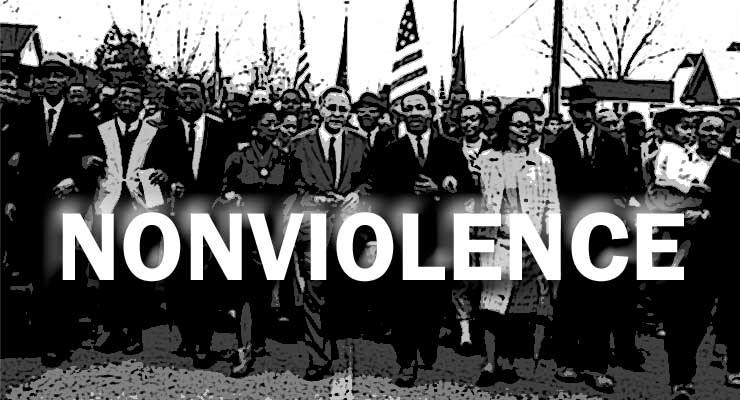