In its 2011 fall meeting, the On Earth Peace board of directors issued this statement of inclusion:

We are troubled by attitudes and actions in the church, which exclude persons on the basis of gender, sexual orientation, ethnicity, or any other aspect of human identity. We believe God calls the church to welcome all persons into full participation in the life of the faith community.

While this statement of conscience arose in the Church of the Brethren, we believe it applies to the whole church everywhere and all organizations.

In 2016, OEP published "A Biblical Basis for Inclusion: A Pastor's Journey" by Irv Heishman, and featured this message in church communications throughout the year.

In its 2019-2020 board meetings, On Earth Peace decided to join the Supportive Communities Network of the Brethren Mennonite Council for LGBT Interests (BMC). 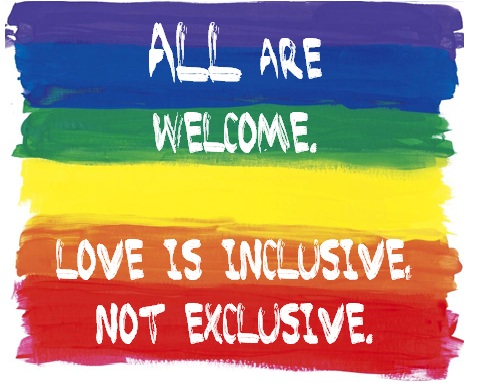 What was the catalyst for making this statement of inclusion?

Our board and staff have discussed concerns regarding exclusion of women, people of color, and lgbtq (lesbian, gay, bisexual, transgendered, or queer) individuals for several years. The 2011 Annual Conference was especially difficult for so many in our denomination, not just because of the subject matter at hand, but also because of the language and actions made at the conference. Unkind and aggressive words were used on all sides of the issue, but the death threat made to an openly gay member of our denomination is especially disheartening, saddening, and deplorable. While the 2011 Annual Conference was the most recent example that moved us to make a statement, it was definitely not the only impetus.

Why did we make this statement of inclusion, when the issues are causing so much strife and controversy within the Church of the Brethren? Does this mean On Earth Peace disagrees with the actions of Annual Conference?

We know that not everyone in the Church of the Brethren agrees with or understands our decision to issue a statement of inclusion. Some individuals and congregations have thanked us for our statement. Others feel we are taking sides in a highly contentious time within the body.

When the 2011 Annual Conference re-affirmed the 1983 Statement, Human Sexuality from a Christian Perspective, we took heed that the statement encourages relationship and open communication rather than exclusion. We believe we are acting in accord with that counsel.

Our statement includes two sentences. The first expresses our deep concern about un-Christ-like actions and attitudes, and the second expresses a belief in the church's call to follow the teachings and examples of Jesus as we see him in scripture. We felt God's leading in our discernment, and hope that we have been faithful to that leading.

Is the statement of inclusion solely about issues of homosexuality and the church?

Not at all. The On Earth Peace board of directors felt it was important to address the exclusion of others – including women and people of color – from our faith community. All three of these forms of exclusion matter to us, and all three were causes of tension and strife among the body at the 2011 Annual Conference. Our statement is not directed at only one kind of exclusion, but all forms of exclusion on the basis of identity.

Do we have any scriptural or theological backing for making this kind of statement of inclusion?

In scripture, we find many examples of how God’s people have been led by God and Jesus to remove boundaries, which their own religious culture has created. For example:

Our own Anabaptist and Pietist background teaches us that we all are called to be ministers to each other, rather than relying on priests to connect us to God. To this end, the Church of the Brethren grew to believe and understand that women, as well as men, can be leaders in the church – a decision made official at the 1958 Annual Conference. Similar history exists within our denomination regarding the ordination of people of color.

Throughout history, God leads the faith community to remove the barriers that culture has created.

Is On Earth Peace accountable to Annual Conference?

On Earth Peace is accountable to Annual Conference, our constituents, and the whole body of believers, and we take all these relationships very seriously.