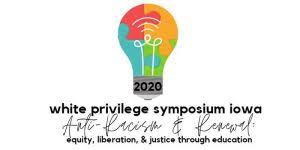 Priscilla Weddle, the Children’s Peace Formation Organizer, and Tamera Shaw, one of the Racial Justice Organizers, attended the The White Symposium Iowa 2020 this year. It was held on November 6-7 via Zoom. The symposium was founded and is owned by Dr. Eddie Moore Jr; it centers on antiracism, equity, liberation, and justice. This year, there were 30 engaging workshops offered and four keynotes: Bettina Love, Wade Antonio-Colwell and Benjie Howard, Jane K. Fernandez, and Jennifer Harvey. Earlier this year, Priscilla and Tamera led a Raising Race Conscious Kids Webinar with Grace Cook-Huffman, Racial Justice Organizer, and Laura Hay, Youth and Young Adult Organizer that was based off of Jennifer Harvey’s Raising White Kids. They were both excited to hear her speak during this symposium.

The first keynote speaker of the event was Bettina Love, who is a professor and the author of We Want to do More Than Survive. She spoke about abolitionist teaching and educational justice. In the beginning of her talk, Love used a powerful quote by W.E.B. DuBois that said, “We who are dark can see America in a way that White Americans cannot.” This quote was mentioned again in later sessions as keynote speakers talked about the election and how many White people were surprised by the amount of people who voted for Donald Trump, while BIPOC were not surprised by this at all.

The second keynote was Benjie Howard & Wade Colwell who reach artists working with K-12 youth and adults in schools across the country, and in wilderness environments. They offer an integrated pathway for youth-centered action toward reducing and eliminating educational disparities, and reframing educational excellence as academic achievement and stewardship for family, community, democracy and the land. During the keynote they spoke about their stewardship and brought former participants of the program to speak about what they are currently doing to fight for social justice. In starting their keynote, they brought a poem called “In Lak’ech” - meaning “I am you or you are me” - by Luis Valdez that really resonated with Tamera. We read this poem together as a group. As the keynote moved to highlight the students, Priscilla found Ingrid Palomino’s story to really stand out to her because it reminded her of her sister. Palomino immigrated to the United States when she was five years old and did not speak any English. She recalled being chatty in the classroom but when she left school she was not engaged and did not have the confidence to be a leader. With the support of her teachers, Palomino found her voice and is currently pursuing her dream of becoming a third-grade teacher. She hopes to structure her classroom in a way that students can first see their similarities and how powerful they are, then bring in different cultural aspects to show them how important their differences are because they make us who we are. During this session, it was announced that Joe Biden was the president-elect. To celebrate, we had a quick dance party. Palomino was emotional when the news was announced and stated that she was excited to help her parents finally get their papers. As the daughter of an immigrant, Priscilla understood the relief Ingrid felt in that moment. Overall, Priscilla was glad to celebrate with everyone and will always remember the joy we shared when Biden won. The announcement really set the tone and mood for the rest of the symposium and spoke to the need to be in community with a diverse group of people.

The third keynote speaker was Jane Fernades, who is a member of the deaf community. She teaches hearing people about hearing privilege and challenges the deaf community to see and be responsible for the racism and white privilege that does not stop existing because of oppressions that they face. Her keynote address was very memorable to Tamera. Fernades talked about first realizing her deafness and what being a part of that community meant for her both in terms of her life experiences but also in terms of her white privilege. In talking about her life experiences, she talked of the privileges of white as being inescapable and not something that you can “get rid of” even if you are disadvantaged in another way. Most importantly, she spoke of how even within the deaf community there is still a concept of privilege and the experiences that she was able to have as a white person as opposed to being a POC. Following talking about her experience, Fernandes opened the floor up for a Q&A.

The final keynote speaker was Jennifer Harvey, who is a professor of religion at Drake University with work focusing on racial justice and white anti-racism. She published the books Raising White Kids: Bringing Up Children in Racially Unjust America and Dear White Christians: For Those Still Longing for Racial Reconciliation. Priscilla was most excited to hear Jennifer Harvey speak because of the webinar series she co-hosted. Tamera was equally as excited in hearing her speak to such a diverse audience. Harvey spoke about the 6 paradoxes of anti-racist Whiteness. Through the 6 paradoxes she named, she emphasized the need to move away from oversimplifying how complicated white supremacy is. Of the advice that she gave, most importantly she said that cultures of inclusion grow from sharing time and space with people that are different from you. In reflecting on the current political moment that we were in during the symposium she highlighted the fact that the election only showed why the deeper dialogues about growth need our attention and that there is much work to be done. Following her keynote address, there was a Q&A.

Priscilla attended a workshop about the whitewashing of history and how to redefine the narrative. Goddess Sower of Sun Seed Community was the speaker of this session. Like some of the other keynote speakers, Sower brought up the concept of racialized body trauma. The group watched a video explaining White body trauma and how White people physically react when the topic of race is mentioned. Even though the topic of race can be uncomfortable to discuss, White people cannot ignore it and need to learn how to tolerate a certain level of honesty during these conversations. Sower discussed ways that White people can help redefine the narrative in their classrooms by getting books written by BIPOC in and outside of the events and narratives attached to them. Priscilla has been trying to do this for the Read Aloud Project by prioritizing reading own voice books.

Tamera was unable to attend the workshop that she signed up for, but she got to listen in on a workshop about religious diversity in Iowa. During the workshop the speaker, Maeve Callan, talked about the religions of Hindism, Buddhism, Sikhism, Jewish, and Muslim to broadcast the vast diversity that most people don’t recognize being a part of Iowa. Her biggest takeaways were to make sure that she wasn’t assuming the religion of those around her based on the “norm” and to do more research about the religions present in her community.

Overall, the political moment that the White Privilege Symposium took place during was very telling of the need for conversations and education similar to this. Tamera felt that being with such a diverse group in terms of racial/ethnic identity, age, sexual orientation, ability, etc. was exactly where she needed to be when the presidential & vice-presidential elects were named. This was not only a space of reflection and learning but it was inspiring to see people from all different backgrounds come together in conversation in hopes of taking new knowledge back to their own communities.