As Priscilla Weddle, OEP’s Children’s Peace Formation Coordinator, finds herself at the end of her year-long internship, she would like to take a moment to look back at her work with OEP. Known for the #ReadAloud program, Priscilla has worked tirelessly on what has become a major part of OEP’s identity during the 2020 pandemic. 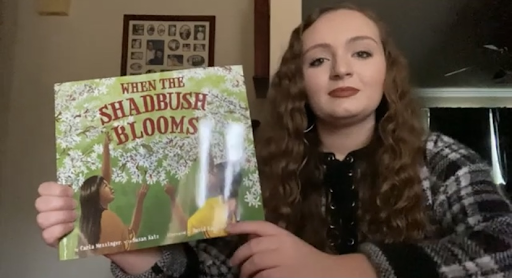 "It is hard to believe that I started this internship a year ago. In the beginning, I did not know which projects I wanted to pursue or what to expect. I decided to hold a mural contest and began planning for it but with the start of the pandemic, I realized that holding a mural contest would not be possible. With help from my supervisor Marie Benner-Rhoades, we were able to come up with another project, the #ReadAloud project. I was nervous to start the #ReadAloud project because I was not sure how well it would be received by the community. Originally, we planned to have the #ReadAloud project for three months. But the project was so popular that On Earth Peace decided to extend it for the entire year, throughout the pandemic."

"I have learned a lot during my time organizing the #ReadAloud project. As I looked for multicultural children’s books, I was able to come across several organizations and publishing companies that focus on activism and promoting diversity. Embrace Race is one organization that has helped me become more knowledgeable about how to talk about race with children. One of the organization’s webinars called "How do I make sure I'm not raising the next 'Amy Cooper'?" introduced me to the work of Jennifer Harvey, who inspired me to create the Raising Race Conscious Kids webinar series that was held over the summer. Lee and Low Books is another company that I found to be helpful in finding my own voice for multicultural children’s books. Several of their books were read for the project and used in my book list recommendations for project readers and blog posts."

"As my time at this internship comes to an end, I hope that the #ReadAloud project continues to be successful and that more people use its educational resources. I look forward to seeing the ideas the new Children’s Peace Formation Coordinator brings to the project. I have a few things I will be focusing on after my internship ends, including completing my master’s program in August and starting a career in the nonprofit sector. I am grateful for the experiences and skills I have gained from this internship and I hope to stay in touch with the OEP community."