On Earth Peace Spring Board Meeting 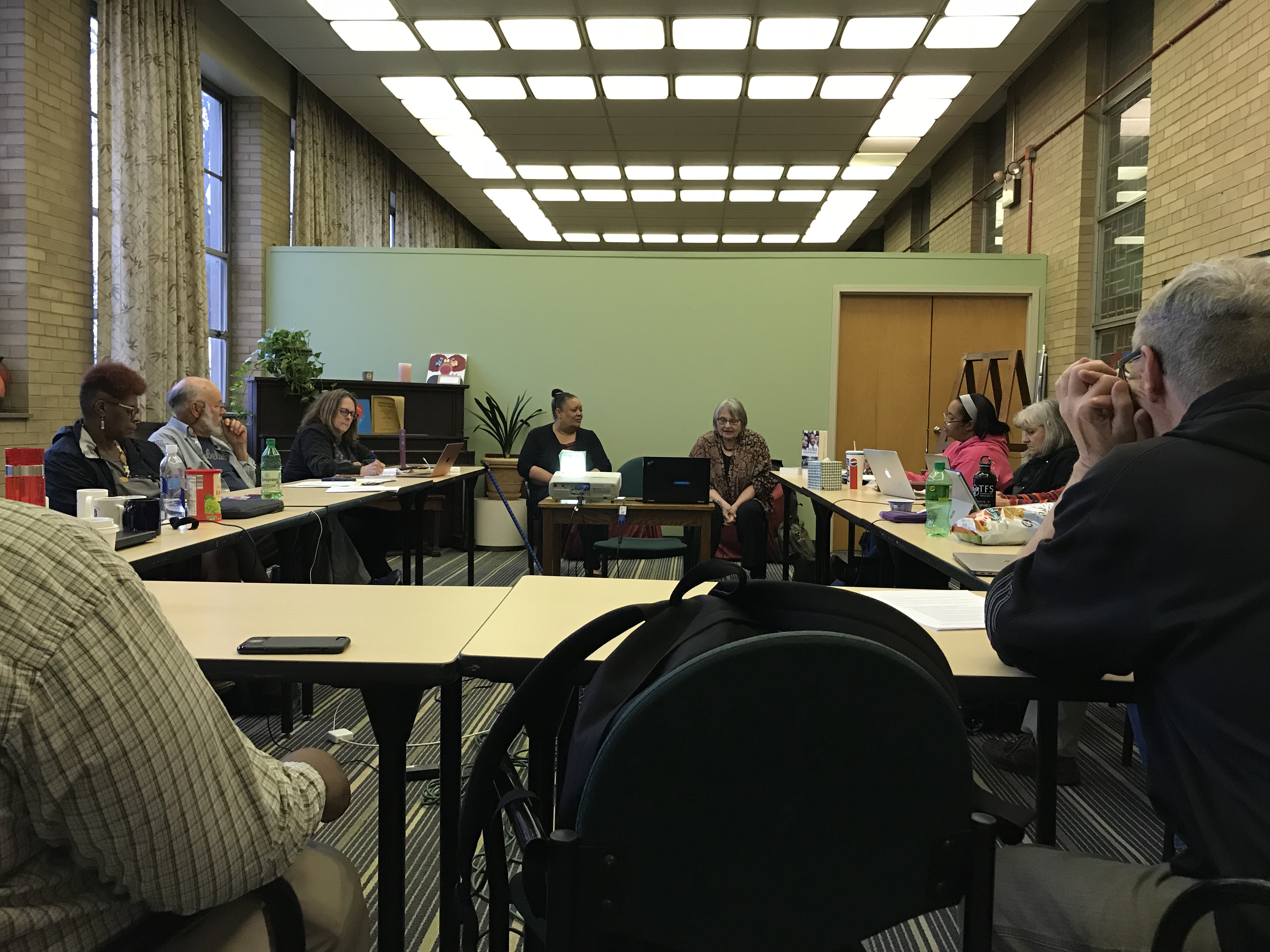 The April 5-7, 2018 On Earth Peace spring board meeting coincided with the 50th Anniversary of the assassination of Dr. Martin Luther King Jr. Some OEP board and staff members arrived in Chicago on April 4, to attend the King commemoration service held at the Chicago First Church of the Brethren. Dr. King had an office in this Brethren church during his leadership of the 1966-67 Chicago Freedom Movement. Other board and staff members attended the “Songs of the Chicago Freedom Movement” concert sponsored by OEP’s partner, the Addie Wyatt Center for Nonviolence Training.

The board’s time commemorating Dr. King continued at the opening session of the OEP board, where two of the Addie Wyatt Center founders, Mary Lou Finley and Pam Smith, spoke about experiences working with Dr. King in Chicago. They shared about their work doing nonviolence training with youth in schools, and shared the video “A Different Approach to School Safety” https://www.youtube.com/watch?v=jmlWtx_otgQ. This was a moving testimony to effective work in a Chicago high school using Dr. King’s principles of nonviolence to reduce violence and create a safer environment.

The board heard staff reports on Friday morning which reviewed current program and also provided a panorama view of the decisions and events which have been formative in the development of On Earth Peace over the past seven years. One critical decision was the commitment made in 2013 to conduct an organizational audit related to institutionalized racism within the organization and to embark on a process of dismantling racism and becoming an an anti-racist institution.

Following the staff report, the board welcomed Jessica Vazquez Torres and Jyaphia Christos-Rogers, Crossroads Anti-Racism Organizing consultants. They helped the board conduct a five year assessment of its progress in becoming an anti-racism organization. On Earth Peace continues to struggle to move beyond a space of symbolic commitment into a place of true transformation. Advanced training was provided to help the organization continue its work and movement, especially focused on the use of caucusing (meeting in structured breakout groups as white people and as people of color). Using caucuses as part of the life of the organization helps to equalize power, build relationships, and wrestle with the impacts of individuals’ internalized racial superiority and internalized racial oppression on the life of the organization. Board members expressed appreciation for this training and expressed renewed commitment to becoming an organization infused with racial justice.

In the evening, the board set aside its agenda to process strong feeling and emotion that were being expressed. In a breakthrough moment, the beginning of this anguish was identified as a deep, unhealed wound opened up by the 2016 Review and Evaluation Committee recommendation that On Earth Peace no longer be an agency of the church. This wound only deepened as the board wrestled with different responses, and this has impacted board work and relationships ever since. Courageous and honest sharing of board and staff in this late night session helped the board begin to release its anger and grief.
On Saturday morning, the board approved a plan to continue caucusing in people of color and white groups in between the spring and fall board meeting. It also approved a plan for developing a leadership calling process which will include the use of caucusing and the consensus processes. The board heard reports from its Finance, Personnel, and Nominating committees which included first reviews of several proposals being developed. Board members and staff participated in an annual review of the executive director.

The board expressed thanks to Carol Rose who completes her term of service as co-chair of the Anti-Racism Transformation Team and to Barbara Avent who has completed her term as board member. The location of the October board meeting will be announced soon.