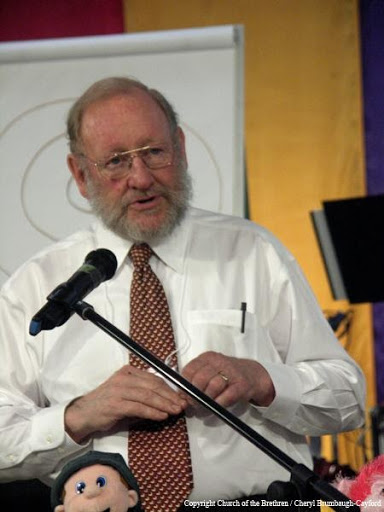 an Interview with David Jehnsen

Together with Bernard LaFayette Jr., David Jehnsen authored the Kingian Nonviolence Conflict Reconciliation curriculum to codify what they learned from working with Rev. Dr. Martin Luther King, Jr., and other Civil Rights Movement organizers. David is a member of Living Peace Church of the Brethren in Columbus, Ohio. Matt Guynn interviewed David to learn more about the roots and vision of Kingian Nonviolence.

How did you get involved with Martin Luther King, Jr., and the Civil Rights Movement?

When I was in Brethren Volunteer Service training in 1962, like all the other members of the group, I wanted to go to Haiti or Germany or Nigeria or someplace else. The night before project selection, I made a change. I stayed up most of the night with Stewart Meacham from the American Friends Service Committee, who had been in Montgomery. He said that all future wars were going to be fought about race or religion - and if you want to do something, get into the cities. So in 1962 at the age of 18, I went to Chicago and to my astonishment, painted floors and picked up old furniture and was a basketball coach. The West Side Christian Parish was organizing a delegation of 38 Black ministers and laypeople and some Jewish leadership to participate in the Albany Movement and National Religious Delegation. However, the Parish had denied anyone under selective service participating in the Albany Movement. Dave Wright, who was going to go as one of three representatives of the Parish, discovered that he had cancer and needed an immediate operation. So at the last minute he sent me, with bond money and a bus ticket. When I came back, I redefined the work I was doing. I took the Loyal Hearts, a college-bound teen group, and created a Parish Youth Action Committee (primarily at Crane High School). I also formed the 7th Congressional District Clergy Alliance to be a liaison with the Southern Movement and to begin building the Movement in Chicago. Near that time (early 1964), Bernard LaFayette came to Chicago and created a SOUL group at the next high school over, Marshall. We trained people following the Nashville sit-in model, in Kingian Nonviolence. Because of my involvement in the Albany Movement and with ministers in Chicago, we formed the background of the Chicago movement. Eventually we were able to convince the Southern Christian Leadership Conference to come to Chicago. After I got out of BVS, I had the designation of field administrator for the Parish. We put Bernard LaFayette on the board of the Parish, and hired Jim Bevel in fall of 1965 to be program director for the Parish, and assigned Mary Lou Finley to be his secretary. Bevel was also Chicago project director for SCLC.

What were your hopes in codifying Kingian Nonviolence Conflict Reconciliation?

How does the faith you learned as a Brethren youth in Michigan relate to your practice of nonviolence? The foundation for nonviolence and racial justice was always there in terms of my dad and mother’s experience with people from all over the world - Chinese; Japanese; Nigerian; African Americans from all over the south. Church leaders like Alvin Brightbill, Dan West, Ora Huston, and Ralph Smucker were always around because my Dad was state [CoB] director for Michigan and he brought them. That provided the foundation. The 6 Kingian principles were all very real in the New Testament in the thinking of the early Brethren, but they weren’t prepared and outlined as such. For example, the Beatitudes, as my dad always mentioned - “Peacemakers shall become children of God” - this became crystallized in MLK’s book Stride Toward Freedom and the Montgomery movement. This provided a fresh view, but they were there in the New Testament.  MLK and his experiences in the southern movement and the emerging human rights movement was based upon those same principles, only it was today, not the history of the historic peace churches!

My hope is that Kingian Nonviolence becomes institutionalized as part of the Historic Peace Church position of the Church of the Brethren because it is such a natural fit. It’s happening with On Earth Peace and it will increasingly become a part of the CoB in terms of their practice of nonviolence. There are racial considerations that must be overcome for that to happen fully and completely, but it’s happening. There are people in the COB who are part of the culture of racism and not a part of the justice movement. This is not just about what happens to African Americans, it’s also about LGBT and other people as well.… Nonviolence and Kingian Nonviolence specifically is the antidote to this.