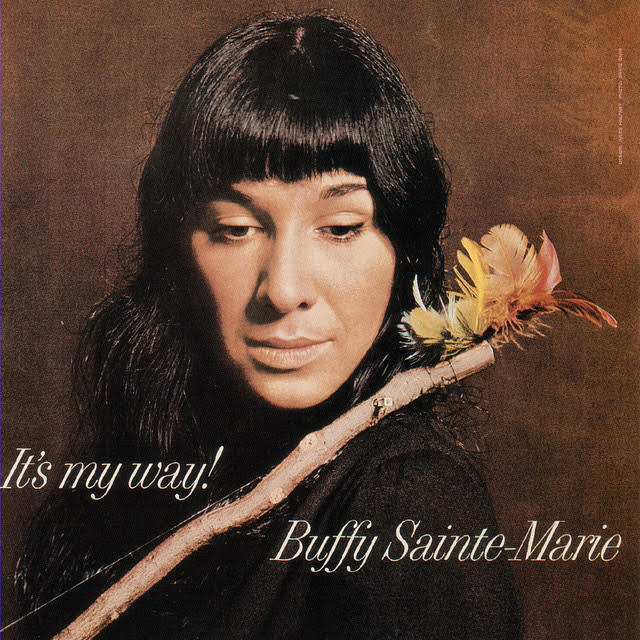 Caption: The cover of studio album It’s My Way! by Buffy Sainte-Marie.

When I visited San Francisco this past November, I toured Alcatraz Prison. A highlight of that destination was an exhibit on the Native American occupation of the island. One of the displays in the museum showed Indigenous contributions to mainstream pop culture and art. I took a picture of an old album cover that caught my attention so I could listen to it when I came home. The folk album was the revolutionary debut record of Buffy Sainte-Marie entitled “It’s My Way!” released in 1964.

I found the album on Spotify and gave it a listen. The songs are strikingly relevant more than half a century later with tracks commenting on the genocide of Native people, confiscation of Indigenous lands, drug addiction, and even anti-war sentiments. I had never heard of the artist before listening to the album and, in preparation for this writing, I decided to learn about her.

Buffy Sainte-Marie is an Indigenous Canadian-American musician and songwriter with a long career as an artist and activist. Beyond her music I was not aware of her extraordinary successes as a digital artist and educator. In the entertainment world she had a regular role on Sesame Street, has had her songs covered by numerous artists including Elvis Presley, and was the first Indigenous person to win an Academy Award for her writing contribution to a Best Original Song. Following her debut she rose to popularity within the folk music community. She used opportunities that came with her newfound fame to advocate for indigenous people, shining a spotlight on issues of the time whenever she was interviewed on television or participated in film projects.

At this point in my internship as an Environmental Justice Organizer I was interested in learning more about Indigenous people. Land exploitation, oil pipelines, the fight for clean water, and a large foundation of the contemporary Environmental Movement are directly linked with Indigenous people. At the time I listened to this album we had just passed Indigenous People’s Day and the month of Thanksgiving was upon us. The culture around me was swarming with revisionism and pro-colonial sentiments. Confronting these oppressive attitudes is the cornerstone of any movement that deals with the rights of Indigenous people.

I am writing about this album and recommending it to readers for two reasons. The first is that it is simply a good album and essential listening for any fan of folk music or media from the 1960’s counterculture era. The other is to highlight the work of a Native artist commenting on issues directly related to her and the marginalized community she is a part of. Giving attention to Indigenous people and movement leaders is essential moving forward in any fight for justice. I hope you give the album a listen and explore new ways to support Native people and celebrate their contributions to our world today.