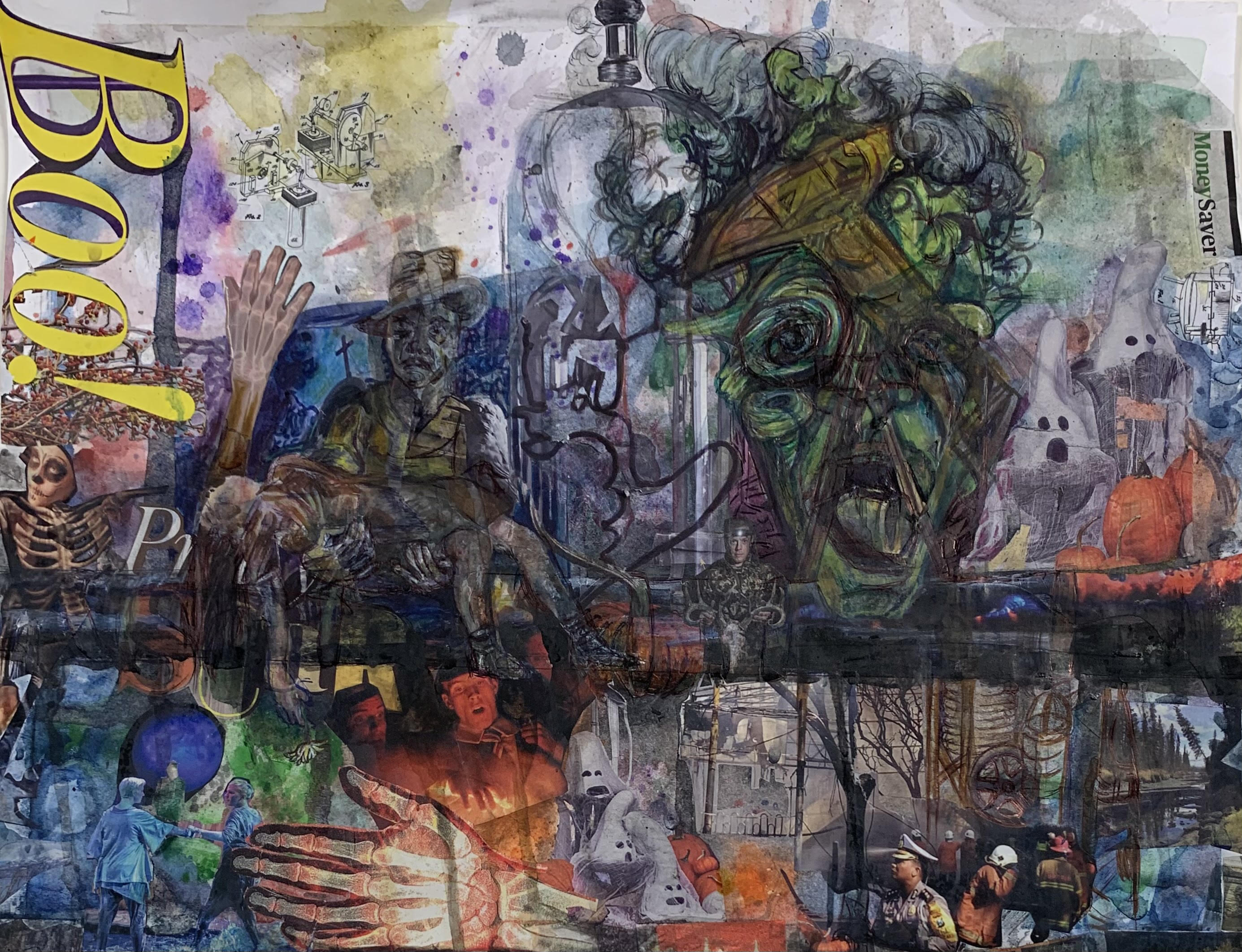 Halloween might be over, but the horrors of climate change are only just beginning. Line 3 is operational and new offshore drilling projects are underway. A pipeline rupture set the Gulf of Mexico ablaze this summer and chaotic weather patterns are leaving countless people and communities displaced. It might be the Halloween season, but this madness sounds like something right out of a scary movie. Throughout the month of October this idea of the environmental injustice being scarier than any spooky tale sparked my artistic imagination.

Environmental destruction is a monster of our own creation. Innovations that could change our world for the better can go horribly wrong and unleash deadly effects onto masses of people. While this may sound like the tragedy of human-created climate change, this blurb also summarizes the general plot of Frankenstein. My observations on the horrors of environmental injustice converged with a seasonal tale when I watched film adaptations of Mary Shelly’s Frankenstein.

The classic 1931 movie is 90 years old, and the iconic imagery was everything I wanted to work with as I explored what this story can tell us about environmental justice. I found additional inspiration in the film’s sequel Bride of Frankenstein. I could imagine the story as an analogy for climate change the entire way through.

The line that stood out the most to me the most from the first film is when Doctor Frankenstein exclaims, “In the name of God, now I know what it is like to be God.” Audiences were outraged at the time, and perhaps that was the point. Imagine a scenario where a human plays God and creates life when we are not supposed to. If we interfere with the sacred elements of nature we are not meant to be involved with, then consequences emerge. The intensified weather patterns that have come with industry decisions like fossil fuel expansion and deforestation have destroyed the way of life for communities across the world. The effects of anthropogenic climate change indicates that we are in over our heads, playing God trying to control natural elements we are not meant to. This leads to an immense human cost.

As I started a mixed media art piece in response, I thought about pollution from greenhouse gas emissions in the atmosphere and oil spills. I poured watercolors and ink onto the paper, marring the surface. I felt this process reflected the accidents we encounter when gambling with nature. Whenever I make environmentally-conscious artwork I instinctively gravitate towards recycling and collaging found materials into the project. This took the form of old magazine clippings that reminded me of imagery from the Frankenstein story, environmental injustice, or Halloween as the holiday that prompted this project. The collaged portions allowed me to document these ideas and ensured my focus on them. The different materials became layered and complex just like our treatment of the environment. We feel the need to continue doing something we understand will harm us. The logic behind this idea must be strange and complicated. Before I continued working on the piece I further reflected on the movies and story that were inspiring me to create.

In the 1931 movie, the monster escapes the lab and finds his way into the surrounding community. It encounters Maria, the daughter of a peasant farmer. They sit on the ground together and throw flowers into the nearby water together. Upon running out of flowers the monster throws Maria into the water, not understanding that she cannot float like the petals the two tossed moments earlier. She drowns, and her father later carries her body through the village declaring that she has been murdered which leads to a mob of villagers hunting down the monster. At the end of the movie Frankenstein is supposedly destroyed after the mill he has hidden inside burns down.

Bride of Frankenstein picks up where the first film left off. Maria's parents insist on inspecting the burned site to see the monster's bones as proof that their daughter’s killer is dead. Upon inspection, they discover the Monster, still alive. It kills them both, wiping out the remaining two members of the family, before beginning a new wave of terror.

This is where I see the connection to environmental justice. We can talk about the effects of our pollution and the harms it might do to the atmosphere or biodiversity, but what truly makes the changing climate a tragedy is the lives affected and ended by it. Hurricanes are getting more violent. Communities have contaminated water, or might be experiencing a drought caused by record high temperatures. Countless Indigenous people have gone missing in conjunction with oil pipeline construction. Farmers around the globe find themselves displaced without a source of livelihood as weather patterns become more and more chaotic. People have died because of our increasingly imaginative addiction to fossil fuels despite investors and producers knowing the danger. The experiments of Dr. Frankenstein leading to the destruction of Maria’s family can serve as a metaphor for environmental injustice caused by corporate interests.

As an homage to this situation from the movie I found a way to incorporate a figure carrying a little girl reminiscent of the scene from the film when Maria is carried through the village. These are people who were living their day-to-day lives, cut short by forces out of their control. I wanted the piece to acknowledge those who bear the consequences of climate change. I intend this image to serve as a metaphor for those people, which led to my efforts to make the race and clothing of the figures ambiguous. I did this with the hope that those experiencing the effects of climate change can feel acknowledged through this rendering.

I have not forgotten about the pivotal role played by the creators of our environmental monsters. In the case of the story, Dr. Frankenstein, from a wealthy background, is able to use his family’s castle as a lab for his curiosities. I feel that environmental injustice is less about the innovations of scientists and more about those perpetuating the expansion of practices knowingly harming the global ecosystem and its inhabitants. These individuals are perhaps oil and gas executives or shareholders concerned with profit over sustainability and the lives of others. Perhaps they are more concerned with their employees depending on their jobs for income. The issue is that corporate interests are being valued over the planet and its inhabitants of the present and future, particularly for marginalized communities. This is a moral violation just like Dr. Frankenstein’s endeavors.

Other victims in the film try to prevent the terror, while the person who drives the creation of this destructive force remains alive. These individuals were presumably from lower income communities, just going about their lives when a destructive force ends it all. Just like Maria and her family were destroyed by the monster, disadvantaged communities are dealing with deadly consequences of environmental terror. This is because affordable housing is more likely to be located near environmental hazards and lower income residents will be unable to afford moving somewhere safer.

Like I said earlier, I want my artwork to reflect those who bear the consequences of climate change rather than those responsible for its continued expansion, so I did not explicitly reference Dr. Frankenstein or any oil and gas industry shareholders in the piece, although I did consider it. I ultimately decided not to because despite the horror movie reframing of climate change, I wanted to ensure I was primarily creating from a place of concern and empathy, not anger. The monster head illustration, while referencing the character from numerous Frankenstein adaptations, also references a scream from the Bride of Frankenstein creation. In the sequel film, the bride of The Monster releases an unnerving screech upon realizing they are not meant to be alive. The green hue in my piece, while reflecting pop cultural notions of Frankenstein, serves as a simultaneous reference to money which drives this catastrophe. Nature is not supposed to be in peril like this. We are continuing to emit carbon recklessly, which is why I tried to make the monster's face emerge from cloud-like shapes.