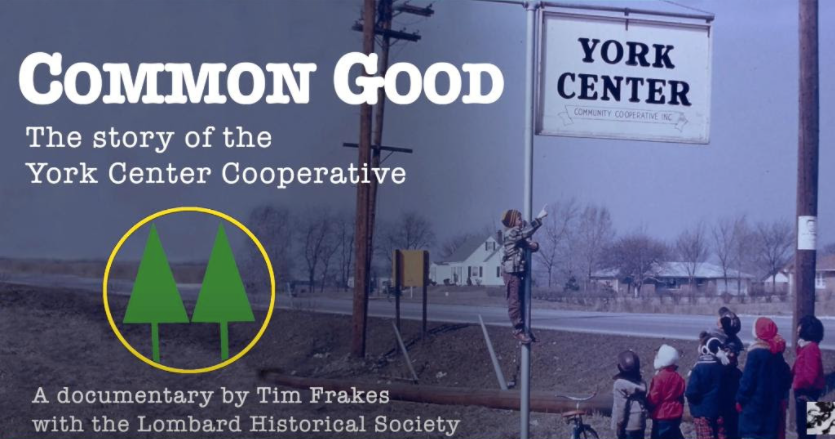 Caption: An image of the York Center Cooperative is seen.

In 1947, the idea of creating a cooperative community was thought up by Louis Shirky, a member of the Church of the Brethren. He gained the support of fourteen families who helped raise the funds needed in order to make this idea reality, where membership was open to 'those of good will' and there was political and religious neutrality. While the community was legally dissolved in 2010, remnants of it still remain, and it's legacy is still felt today, as 'Common Good: The Story of the York Center Cooperative' was released this year. This documentary accounts for the cooperative community and tells of its history.

As the son of two of the founders of the York Center Community Cooperative, I believe my life was profoundly affected by growing up in such a diverse (ethnically, racially, religiously, politically, educationally, and monetarily) community.  The Common Good documentary describes the origin of the Co-op’s founding Rochdale Principles and describes the growth and struggles of this group of pioneers in founding an oasis of peaceful problem solving and caring community (80 families, each with an acre lot, who helped each other build their own homes and became like family) 18 miles west of Chicago from 1948 to the present.

We also shared various religious and non-religious holidays together.  Many of us went to Hanukkah party and played dreidel and ate potato latkes in a Jewish Co-op member’s home.  We trick or treated in the community collecting for UNICEF followed by hot cider snd cookies around a fire pit. We had a Christmas mitten tree event collecting mittens, gloves, and warm clothing for needy families beyond our community. When I attended Jr High and High School my classmates were sometimes surprised that I had close friends who were African American, Japanese, or Jewish.  It was then that I began to become only marginally aware that many people treated those friends differently than they treated me.  Yet my friends of color or other ethnicities never said much to me about the slights and discrimination they felt.

I believe I am more tolerant and accepting and have been a better supervisor and employer because of the values I saw modeled and learned in our unique community.  I have never found the same strong sense of community, mutual respect, and care in the neighborhoods where I have lived since.  Everyone has value and our differences should not separate us. What I want or think I need always needs to tempered by consideration for the wants and needs of others.