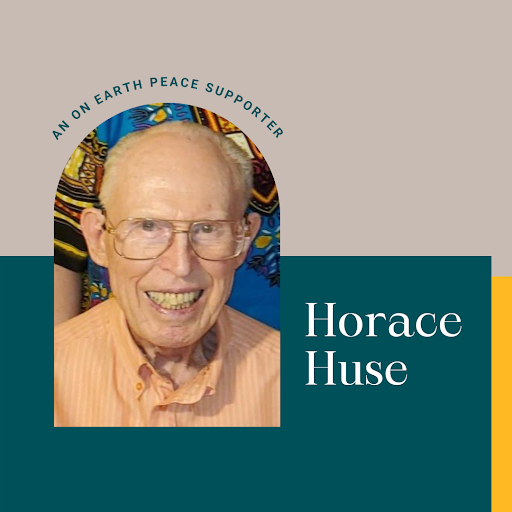 As I was transitioning into my role as On Earth Peace’s Migrant Justice Organizer, I received a kind and supportive email from Horace Huse, who provided a snippet of his life story. This email was not only an entrance into Huse’s diverse experiences and commitment to migrant justice, but it was also an invitation to build community. It illustrates how genuine curiosity can foster meaningful engagement, and it reaffirms how storytelling can bring people together. Horace Huse granted me permission to share parts of his story, and I have done so below to grant others the opportunity to connect with and learn more about fellow On Earth Peace supporters:

"I grew up on a 40 acre ranch (in California, anything more than about 10 acres is called a ranch). My dad built the house and barn and planted the bare ground to walnuts, almonds, grapes, and about two acres of apricots. The grapes were planted between the rows of walnuts and almonds to provide a quick source of revenue. Dad died when I was nine years old, just as the orchards in the first 20 acres were reaching their prime…My mother took over the farming, and planted [the remaining] land to tomatoes for a cash crop (late 1930s, early 1940s). I have little or no memory of how the grapes were picked before my dad died, but I do recall migrants picking the grapes as I grew older, and also the tomatoes."

"Obviously, my dad’s death placed a huge amount of stress on my mother, but I do not recall her complaining about it.  Her faith in God, the love and support of our family, and her strong work ethic kept her going. What I do clearly remember was her deep fear and distrust of the migrant laborers. To my knowledge, she never dared to place herself or any of us children (I had 2 younger brothers) in a situation where she had to meet or talk with them…I think she depended on my uncle (dad’s brother) to negotiate the contracts and oversee their work.  That’s the social and emotional climate for the first chapter in my experience with migrant workers…The distrust and prejudice were palpable, and I’m quite sure it made its impression on me in my formative years."

"In my high school years, there was an influx of people into California, some of whom were also migrant workers. Some of their kids went to my high school, so I got to know them as people, who were often teased for their “strange” ways of speaking and their habits of dress and behavior. My extended family (uncles, aunts, cousins, etc.) shared in the hazing, mostly from the sidelines.  However, having classmates from that group created a bit of a conflict inside me, because at least one of them became something of a high school buddy, and his father was employed as a butcher at the local grocery store, giving him some standing in the community…"

"Then after I entered the ministry, in the late 1960s, our rural parsonage in Indiana was across the road from a migrant camp.  I don’t think I ever perceived my ministry as extending to the people in that camp, but that gave me an upfront view of life in one of those camps.  The shacks were one-room buildings without running water or bathrooms, with a primitive kitchen and beds. There were outdoor stand pipes for people to draw water and a couple of outhouses. Since the clientele were mostly Mexican, they played typical folk music on Sundays when they didn’t work, held dances and celebrated holidays. Since they were only there for the tomato crop, they only lived there during the summer and early fall.  I don’t recall any school bus stopping when school was in session, but perhaps in that period of my life that wasn’t a concern. Since a different group came every year, I never got well acquainted with any of the people, but I did make it a point to speak to them and tried to be neighborly in some small ways.  For instance, I took one of the young men to the local emergency room eight miles away after he was knifed in a fight.  Once when there was a wedding, I was invited to the party, so apparently I had developed some kind of rapport with at least that family.  They knew I was a Protestant minister, so I think they had some respect for my religious calling.  I moved away from there four years later, but my experiences with that camp have stayed with me ever since."

"About seven or eight years later, I was pastoring a Church of the Brethren congregation, and I started getting involved with the Indiana Council of Churches.  I began learning how Christians were applying their faith to their daily lives, and in particular to the public, political spheres of life. That included such things as justice for migratory laborers! That’s when I began to acquaint myself with issues of decent housing for migrants, education for their children, the socio-economic effects of discrimination in legal and social policies and practices that affect their lives, and the role of the church in dealing with these matters. While I found considerable support from some denominational and ecumenical leaders, I was never able to raise much if any support from the local congregations I served.  I supported local and state-wide as well as national ecumenical programs and efforts to promote awareness and change in public and private policy, but was quite aware that I was a lone voice in my local congregation, and did not act very energetically to gain their support or help in these efforts.  Nevertheless, I think I may have had some slight influence on a few of my parishioners, but am also quite convinced that my “liberal” views contributed a good deal to shorten the terms of my three- to four-year pastorates and requests for my resignations, which led finally to me deciding to leave the parish ministry and retrain for hospital chaplaincy."

"Hospital ministry removed me from the front lines of engagement with the socio-economic realities of the world of agricultural workers, but still brought me in constant contact with some of those same people as they faced medical issues. So I continued to see the intersection of faith and justice even in those health-care situations, which kept alive my concern for and support of such efforts, even though I had no natural forums from which to participate.  That same concern has continued into my retirement years, and I have eagerly sought avenues through which to share these concerns and support such efforts as those On Earth Peace is promoting."

Horace Huse recently participated in the Oasis Center in Annapolis, MD, and On Earth Peace’s Training for Community-Based Responses to Asylum Issues: A Kingian Nonviolence Approach. His thoughtful responses and personal sharing with the entire group allowed him to expand his network and receive personalized suggestions for local community engagement.

If you would like to receive the recordings of the first four sessions, please email: [email protected]