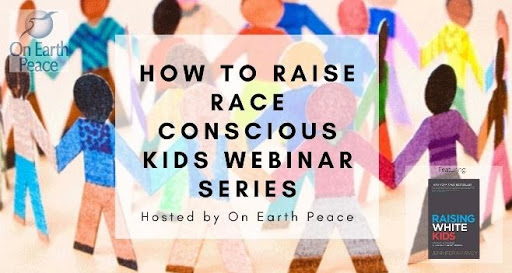 From July 23rd to August 13th, On Earth Peace held a webinar series called “Raising Race Conscious Kids.” Several members of OEP were involved in creating the series, including Marie Benner-Rhoades, Priscilla Weddle, Laura Hay, Tamera Shaw, and Grace Cook-Huffman. Topics included culturally responsive teaching, the myth of color-blindness, the role of racial scripts, and the future of racial justice. The books “Raising White Kids: Bringing Up Children in a Racially Unjust America,” by Jennifer Harvey, and “Why Are All the Black Kids Sitting Together in the Cafeteria and Other Conversations About Race,” by Beverly Daniel Tatum, were used to guide the discussions.

OEP’s Youth and Young Adult Intern Laura Hay led the first discussion along with Priscilla Weddle, the Children’s Peace Formation Coordinator. Hay presented the predominant methods on how race is taught in schools and at home. These include color-blindness, diversity, and race-conscious teaching. You can watch the session here.

Priscilla Weddle led the second session along with Laura Hay. The discussion involved the role of racial scripts and how we feel race in our bodies. Racial scripts are formed from past events or experiences and impact how racialized groups are viewed and interact with one another. Several examples from “Raising White Kids: Bringing Up Children in a Racially Unjust America” and “Why Are All the Black Kids Sitting Together in the Cafeteria and Other Conversations About Race” were used for explanation. For the closing activity, different scenarios were listed, and the participants were asked to explain how they would respond if they were in those situations. By doing this, participants could see how to disrupt racial scripts.You can watch the second session here.

The last session was led by OEP’s Racial Justice Organizers, Tamera Shaw and Grace Cook-Huffman. They talked about the future of racial justice. The following topics were covered: cultural appropriation, colorism, microaggressions, White fragility, performative allyship, and intersectionality. For one of the activities, participants were given a journal prompt asking which topics would be challenging and important to discuss as they work towards race-conscious parenting, teaching, and mentoring. At the end of the webinar, Grace and Tamera encouraged participants to continue talking about the topics covered in the series and to feel free to reach out to the facilitators of the series if they want to talk or have any questions. You can watch the final session here.

For additional resources on Raising Race Conscious Kids, we put together this resource guide that you can read here.